Gol Amiri is a Security officer stationed on the Sydney Harbour Bridge.

During September in 2011, Gol was carrying out his normal patrol of the road and cycle way on the bridge, when he noticed a young man looking over the side and acting suspiciously.

Gol quickly realized that the young man was trying to reach an area of the bridge that was well known as a preferred location for people intent on attempting suicide.

Determined to stop the young man, Gol grabbed him from behind, restraining him with all his strength. As the two struggled, the offender warned Gol that he is an AIDS carrier and pleaded with him to let him go as he believed he had nothing more to live for.

Knowing what would happen if he let go, Gol continued to wrestle with the young man, calling for assistance from the emergency services. As the two continued their desperate struggle, Gol was repeatedly spattered with blood now freely running from the young man’s many cuts and scratches.

There can be little doubt that this point, out of fear for one’s own safety, another person might have chosen to simply give up and let the young man go. The offender’s medical condition was one that could easily end Gol’s life. However, fully aware of the danger he faced, and having made the decision that his safety was secondary to the welfare of the person he was trying to save, Gol Amiri continued to struggle with and restrain the young man for a further 20 minutes before help finally arrived.

Gol reported to his manager soon after the event, describing what had transpired. Amazingly, even at this point Gol’s primary concern was for the welfare of the young man he had been trying to help. Following his debrief, Gol was sent for blood tests to determine whether he had contracted HIV Aids as a result of his exposure to contaminated blood. After a tense four week wait, Gol was thankfully given the good news he had not contracted the AIDS virus.  Gol is still asking about his patient’s well being to this day.

This type of dedication, going above and beyond the requirement of a security officer is what makes Gol Amiri stand out from the crowd and is why he was awarded the Australian Security Medal of Valour. 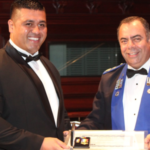 Drew Ioanne is described by his friends and colleagues as a larger than life type, both in stature and in nature. Drew is a highly valued member of the Mt Druitt Security Team where he has worked at the Westfeild shopping centre since March 2006.

On the 4th February, 2011, a large number of youths had arranged via social media to meet at the Western Suburbs Shopping Centre for the purpose of engaging in a brawl between two rival factions. According to reports, a large group of youths began massing in Dawson Mall outside the main entry point to the Shopping Centre at around 6PM.

As Drew was posted at this entrance, he was able to keep the trouble makers from entering the centre and, with the assistance of local police, was able to keep Dawson Mall under control.   However, at around 7PM, approximately 25-30 youths entered the centre from entrances at the opposite end to Dawson Mall and proceed toward the food-court.  There they then began goading several smaller sections of a rival group, chasing them around the centre.

As the chase continued, it drew in a large number of young bystanders who began followed the assailants, creating a ‘tidal wave’ of running, out of control young people resulting in several small fights.

Events turned serious when two older males, aged in their 20’s  became engaged in a fight. Surrounded by a flock of on-lookers,  one of the older males produced a knife and began waving it in front of his body in a threatening manner, clearly intent on using the knife against the other male.

It was at this point that Drew, who until now had been restraining another person to prevent him from entering the fray, deftly stepped beside the knife wielding offender, grabbing him by the wrist and plucking the knife from his hand, both disarming and restraining him at the same time before handing him off to police some minutes later.

Drew’s quick thinking and courageous actions, executed in a calm and controlled manner, not only prevented serious injury but also served to calm a rapidly deteriorating and potentially volatile situation.

Local police commanders have praised Drew’s actions  and his constant assistance in identifying repeat criminals operating in the community. He has been cited by Westfield National Security as one of the best security officers in the country and the most important asset for the safety and security of the Mt Druitt shopping complex. 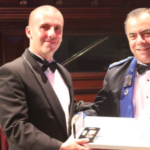 Adam Motum, responding to the call for back-up to an altercation at a Syndey inner city building rushed to the scene where a group of about 12 to15 males had become engaged in the altercation centred around two to three main participants.

As Adam approached the group, he realised that one of the males (seemingly the main offender) was holding a large meat cleaver. Another male, who appeared to the be the victim, had a shirt wrapped around one hand and blood on his clothes, having apparently been struck with the meat cleaver.

As the two men stood screaming at each other, Adam instructed the Control Room Supervisor to call the Police before ordering other people at the scene, including Security Officer David Cunico who had also been attempting to defuse the situation, to stay back. Then, with little regard for his own safety, Adam’s stepped between the attacker and the victim, shielding the victim from further injury and in an attempt to calm the situation.

Over the next few minutes, Adam also deliberately placed himself between the attacker and campus staff and students on multiple occasions to shepherd the attacker away from other potential targets; all the while being threatened and screamed at by an extremely aggressive and agitated attacker wielding a bloodied meat cleaver.

Adam then managed to get the victim away from the scene and back to the Security Office where MSS Security team members were able to perform First Aid. Upon returning to the scene of the altercation, Adam found the attacker on the ground where he was being subdued by several members of the crowd.  Adam proceeded to direct the untrained bystanders to step away to safety, while he took over the restraint of the attacker and instructed David Cunico to take the meat cleaver to the control room and assist with first aid on a number of injured persons. Police arrived shortly after and arrested the attacker.

As a result of his actions, Adam has also been nominated for a NSW Police Bravery Award and it is only fitting that this evening he be awarded the Australian Security Medal of Valour.