Darren Kane was appointed the Director of Telstra’s Corporate Security & Investigations group in June 2009.  Under Darren’s direction, this group provides both strategic and operational security advice and response across the company.

Holding a Masters of Business Administration and Diploma of Financial Markets, Darren began his career as a member of the Australian Federal Police where he served for approximately 13 years.  Having been attached to the National Organised Crime branch and undertaken secondments to the National Crime Authority and the Australian Securities Commission, he finished his career with the AFP as a Detective Sergeant.

Since joining Telstra, Darren has spent several years’ developing an understanding of potential on-line risks, and in 2008, as part of his role, he was appointed to the position of Telstra’s Officer of Internet Trust & Safety where he is responsible for coordinating the company’s commitment to cyber-safety for all people associated with Telstra’s products and services. Part of this responsibility also sees Darren sit on various boards and committees including the Federal Government’s Consultative Working Group on Cyber-Safety and reference and well-being committees for Non-government Organisations. This role has enabled Darren to broaden his scope of influence and to continue to develop expertise and knowledge in a quickly evolving area, constantly growing in its importance.

Darren’s team provides on-going support to law enforcement bodies investigating online crime and was, in 2005 a founding partner in the Virtual Global Taskforce, a group comprised of police forces from around the world working together to fight online child abuse and which seeks to build an effective, international partnership of law enforcement agencies, non government organisations and industry working together to prevent and deter online child abuse.

Through their efforts, Darren’s team have won numerous international awards for Internet security and safety and have been invited to speak on cyber safety at some of the world most prestigious and respected online security events. It is for his hard work, leadership, vision and dedication to protecting children from online Child Exploitation that Darren Kane is being awarded the Australian Security Medal. 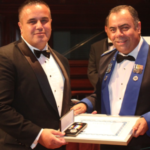 Paul Maihi is the Head of Crisis & Security Management for Westpac Banking Corporation. Paul is responsible for managing the crisis & business continuity activities for the Westpac Group, as well as the Group’s security risk management process for Westpac in Australia and all of Westpac’s offices globally.

Paul has accumulated twenty-five years experience in law enforcement and security related fields. Paul was also an Investigator for the NZ Serious Fraud Office, specialising in complex mortgage fraud investigations. He has managed Fraud and Security departments for four Banks in both New Zealand and Australia.

During his time in the security industry, Paul has gone above and beyond that which is expected of a typical security manager, working to significantly improve the professionalism of the industry, set new benchmarks and benefit the community at large. His dedication, commitment, leadership and drive can be easily demonstrated by the extent to which security is respected and entrenched at Westpac and the numerous industry and associated bodies that Paul and his staff lead and support.

Paul has served as the chair of the Banking and Finance infrastructure Advisory group from 2006-2008.

Paul’s achievements can also be seen through the development and mentoring of his staff. Paul has deliberately “encouraged” his staff to take the lead in industry bodies. He has also made funding and resources available to ensure the wider industry are engaged and can communicate, develop security, fraud and emergency management on a holistic basis.

Paul Maihi is an asset to the security industry and to some extent a “quiet achiever”. Since his move from the NZ police service, Paul has been instrumental in raising the level of professionalism in the security industry, developing successors and bridging the gap between the industry, government, law enforcement and peers. It is for these reasons that he is tonight being award the Australian Security Medal. 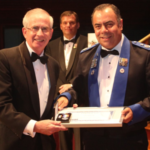 Paul Retter is the Executive Director of the Office of Transport Security at the Department of Infrastructure and Transport.

In his current position, Paul is responsible for the Office of Transport Security’s work within the framework of the National Counter-Terrorism Plan. This involves providing strategic leadership and national consistency in transport security; Setting and enforcing a preventive security framework for the aviation, maritime and Oil and Gas sectors; and working with State and Territory governments to implement effective and consistent preventive security measures in surface transport.

In his role as Office of Transport Security Executive Director, Paul has focused not only on his role as the security regulator of the transport sector but on transformational strategies to take the industry to a more risk based, outcomes focused approach.

His primary focus has been on:
•enhancing the security professionalism of the industry,
•setting new benchmarks for security; and has
•worked tirelessly in his service to the community.

Paul’s outstanding dedication, commitment, leadership and drive are demonstrated by the extent to which Australian transport security outcomes are recognised globally.

Paul speaks regularly at security conferences around the world and is widely recognised for his effectiveness as a public speaker and advocate for collaborative security risk management.  He represents the interests of Australia, transportation security, and most importantly, the community to the highest order.

As such, Paul has been instrumental in positioning Australia as a world leader in relation to transportation security and secured a seat at the global regulator forum called the ‘Quad’ meeting – consisting of lead regulators from UK, USA and Canada.  This positions Australia at the forefront of influencing and shaping global security and regulatory reform.

Already recognised by the broader community by being made a Member of the Order of Australia in 2006, Paul has laid the foundation for a significant legacy to the Australian security industry, making him most deserving of the award of the Australian Security Medal.